Each pod has its own IP, hostname, processes, network interfaces and other resources.

A pod contains one or more containers. These containers share a node and some Linux namespaces (it's configurable, e.g. pod's containers by default do not share PID namespace). 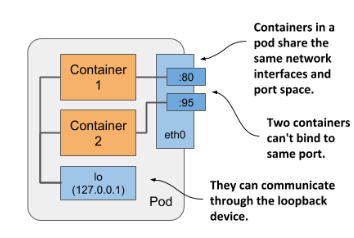 It makes sense to have multiple containers in a pod if these containers need to work together closely. The example below shows some web app and a sidecar container providing TLS support: 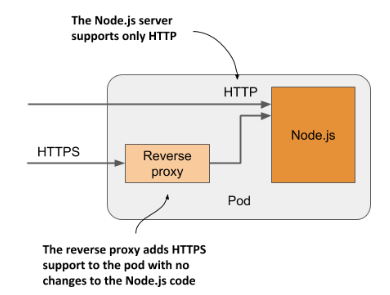 Containers in a single pod are scaled together.

All pods can talk to each other, and they are reachable from any node. Pods may define the ports they use in YAML, but they do not have to. It's only informative (and it gives possibility to name the ports, which is useful when creating Services for them).

Deleting a pod deletes the logs as well. Logs are kept in /var/log/containers on the nodes.

Init containers should work in an idempotent way.

Pod's conditions (a part of "status"):

These policies can be defined only on the pod level, not on the container level.

When container dies and gets restarted, there is a varying delay before the container starts:

First time is immediate, then it grows exponentially up to 5 minutes. This behaviour is reset if the container has run successfully for at least 10 minutes.

K8s automatically restarts container that crashes. However, there are situtions when the app does not terminate, but is unhealthy (i.e., in a deadlock).

Liveness probe may be defined for every cotnainer in a pod. It is checked periodically. If container does not respond, it is considered unhealthy and is terminated (and restarted). They cannot be used with init containers.

K8s does not mention anywhere that probe is successful. It could be logged by a tested container by an app running on it.

When probe fails, K8s tries to terminate the app gracefully (with TERM). If that fails, it kills is forcefully (kill -9).

It is used to check if the pod is ready to accept requests. Like Liveness Probe supports three types.

Containers without Readiness probe are considered Ready as soon as they are started.

If Readiness Probe fails, a pod is removed from Endpoints object of a service. It is not restarted, like with the Liveness Probe.

Additional proble - Startup Probe may be added if the app is known to start long. Then, separate configuration is used to check app health during startup. We might define how long it should take for the app to start responding for health checks. It's perfectly normal for the Startup probe to fail a couple times initially. Successful Startup probe indicates that K8s should switch to the Liveness probe. It is usually executed at shorted intervals making sure the app is alive.

Only after Complete Startup the container may become Ready (via the Readiness Probe).

Usually both probes use the same endpoint, but they can be different (or even use different type).

There are two hooks:

They are specified per container.

Init containes are similar to post-start hooks, but they're defined per pod.

They can be defined as HTTP GET, or as "exec" (just like probes). "tcpSocket" is not supported.

Container is in the "Pending" state until post-start is completed. Logs also cannot be seen even though container is already running. If the hook fails, the container is restarted.

The post-start HTTP hook should not be used if we want to target the same container with it (or the same pod in general). It could happen that the hook will be executed before the webserver is started in the container. It will cause a restart since HTTP request will fail. We end up in a restart loop. HTTP hook is good for notifying some other apps about the container starting.

The pre-stop hook is not invoked if the app terminates by itself.

If the pod is to be killed, a TERM signal is sent to it. By default, 30s is given for the container to shut down gracefully. It can be changed with the terminationGracePeriodSeconds setting in spec. If the time passes and container still lives, KILL is sent to it.